They say cats have nine lives. If this is true, then my cat had better find some more because he’s running out of them fast, and he’s only a year and a half old!

We call him Taffy. It’s a strange name for a male kitten, but at the time we thought he was a female. My daughter, Sherry, said he had soft fur and a sweet temperment. It sounded like Taffy to me. When we discovered he was a male, we didn’t have the heart to change his name. But we should have. We should have called him Rocky. Or Fiesty. Tough Little Survivalist Cat.

He was a little ball of white fluff when we met him with blue eyes and orange ears, a Flame Point Siamese.

After traveling seven hours in a car, he was full of fight and sauce, hissing at my daughter when she told him  not to meow so  loudly. God gave him a loud meow. It’s very annoying, but it saved his life.

He was born on a ranch in Montana, a barn cat, with four or five siblings. I had asked Sherry to watch out for a Siamese mix kitten, and her friend said she had some ready to go.

Sherry and her husband, Jesse, arrived at the ranch on Thanksgiving evening with the wind blowing and the snowing falling. It was cold and the poor little kittens were frostbitten and nearly starved. They got Taffy’s sibling first, a kitten they named Klaus. I was supposed to get him. But then the lady called and said there was another kitten who was very lonely and cold who needed a home, too. Jesse couldn’t resist. He drove back out to the ranch and got Taffy.

They learned that the two kittens had survived an attack from either a large rat or a raccoon a few nights before. The other kittens in the litter were killed, but Taffy must have fought his way to freedom. He has a scar on his chest that itches at times, and I think it must have been from that fight.

First life down the drain. 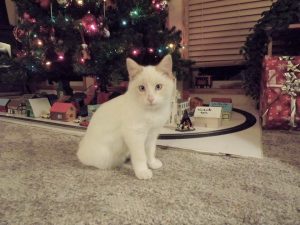 Under the Christmas tree just a few weeks old

We got him several weeks later in Missoula, MT, when we met Sherry and Jesse, and they handed over the kitten. I loved him from the moment I saw him, and when I held him and looked into his intense blue eyes, I knew this cat was a gift of God. He has the softest fur I’ve ever felt on a cat, and even though he’s a fighter, he has his gentle, quiet moments, too, when he cuddles up on my lap with his loud purr and settles down for a nice little nap.

We brought him home. Gave him food. Toys. A litter box. Treats. A cat tree. Soft blankets. Held him. Loved him. But it wasn’t enough. He was an Outside Cat, and he longed to explore that wide, wonderful world he saw through the window panes. 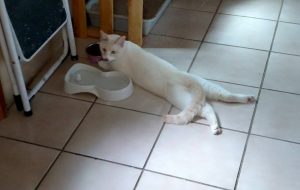 His favorite position when totally relaxed. After a full day of chasing things that move outside, he was too tired to stand and eat!

I didn’t let him go until we had him spayed, vaccinated, and chipped. After the surgery to have him spayed, he developed an intense inflammation in his inner ear. He couldn’t walk and could hardly see. He spent that night in the hospital. The next day, the doctor said she gave him very little chance of surviving and doubted that he could eat or drink. We brought him home. He learned to drink and eat with his head at a tilt. In fact, he still walks with his head tilted. We prayed for him. People in the church prayed for him. And he got better.

Second life down the drain.

I walked him on a leash for several months before I let him go. We live on a golf course that is situated in the midst of towering pines and frowsy firs. A cat’s paradise. By giving him treats and lots of praise when he came in, he learned to answer my calls with his big meow. He comes trotting up to me, no matter where he is in the woods or under someone’s porch. He loves to wander, and he’s made friends of all our neighbors (or most of them).

He’d been out for several hours one day last summer when Dan (who was on the deck) heard him meowing. He went to investigate and found him by the road, unable to walk. The vet discovered no broken bones, but his hind legs were badly damaged. We carried him around for about a week and gave him antibiotics and pain killers. And we prayed for him. We don’t know if he fell from one of the tall trees around here or was hit by a car. He couldn’t tell us. After about three weeks, he was up and running around again, healthy and happy.

Third life down the drain. 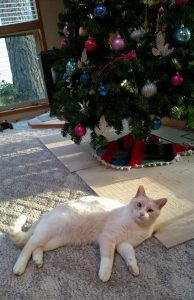 Enjoying a warm, quiet moment in front of the Christmas tree

All was well for several months. When it got cold and snowy, he didn’t stay out as long or wander as much. He made the big spruce trees in our front yard his “headquarters” because birds nested in the trees. He was especially fascinated with the quail. Still, he came when I called (most times) and we didn’t think he went far up or down the road to visit the neighbors.

Then one day just last week, he didn’t come home.

It was a warmer day than it had been, and we knew he was itching to get out and go on one of his “walk-abouts”. But when he’d been out for four hours, I began to get worried. We started walking the neighborhood, calling him. But there was no answer. We made regular trips outside, and as it got dark, took flashlights. I knew that if he could come in, he would have. 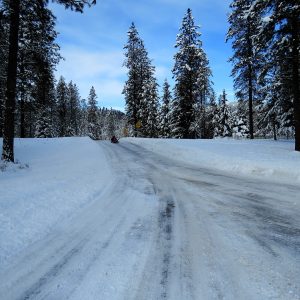 We had to consider the awful possibility that a predator got him – either a coyote, cougar, eagle or owl.

Yet we hadn’t seen any sign of four-footed beasts in the area recently, and not any flying ones, either. I enlisted the help of friends, both to pray and to help us search.

It was all to no avail, and by evening, I knew he was gone.

All night, I heard him meowing, would jump up and open the door, but there would be no Taffy, waiting to come in. It was like the earth opened up and swallowed him. I couldn’t even find any sign of his being attacked, like prints in the snow or blood and fur.

The temperature that night dropped to 5 above zero.

By morning, when he still didn’t show up, I knew he was not coming home. Ever. About ten that morning, I felt such a burden to pray for him that I dropped by my bed and poured out my heart to God. It felt like God was very far away and that He did not care.

Yet, of course, I was wrong. God was very near and He cared very much.

I decided to ask the neighbors to look for him and to check their sheds and garages. While I was doing this, I got a phone call. It was a man. His first words were, “Do you have a white cat with a blue collar?”

The man said, “Well, we’re out here snowmobiling and found him. Here. You can talk to the man who found him.” As soon as the other man came on, I heard Taffy’s distinctive meow. He sounded alive and well to me!

The man said they were at the trail-head for the State Park on Sand Canyon Road, the one that goes by the golf course. I couldn’t believe my ears. But I believed my heart. We piled into the car and drove to the trail-head.

It was six miles from the house.

There they were, about four men with snowmobiles. One of them opened the back of the topper on his pickup, and there he was, all hunched up, scared, and meowing. Oh, the joy that flooded my heart when I held him in my arms! The man said they had come that morning to snowmobile and heard something meowing in the woods. There, off the staging area about five feet, underneath a dead-fall, was a cat. My cat!

Four lives down the drain.

We can only surmise that he explored a pickup or trailer, climbed inside, and went for a ride six miles from home. That he survived the cold night without frostbite or anything else, that he stayed near the staging area, that he wasn’t eaten by a predator, proves to me that God hears and answers our prayers.

What can we learn from this little story?

*God loves us, He cares, and He is willing to help us even in the smallest detail of our lives.

Don’t hesitate to bring small matters to His attention. He loves to hear your voice. He wants to help you. And He will. “Casting all our cares upon Him, for He cares for you.” I Pet.5:7

*Leave the outcome to Him. I was willing to say, “Whatever way this goes, I am okay with it. But I’d like to know, God. Please let me know.”

He is sovereign and for reasons unknown to us, He may choose to answer our prayer in a way that we do not want. But He is also love. Whatever His will is for us, that is the best. Keep that truth tucked away in your heart when you have a disappointment, an unanswered prayer, or bad day.

*Remember to give Him the praise and glory when He answers prayer.

It wasn’t about how well I could pray or how much faith I had. It was about His faithfulness, His goodness, and His grace. Don’t steal the glory from God. Tell everyone what He has done for you. I told the man on the phone, “You don’t know how many prayers have been answered!” And to the men in the forest, I said, “I was on my knees, praying, when you found him!”

My little cat is back with his loud meow and ornery ways.

I am thankful each time I see him. He is a gift from God, and I treasure his friendship and companionship.

If you live in my neighborhood, you will probably hear me calling his name. “Taffy! Taffy!” And you’ll hear his meow in response – that loud meow that saved his life.

If you enjoyed this story, share it with your friends and drop me a note. 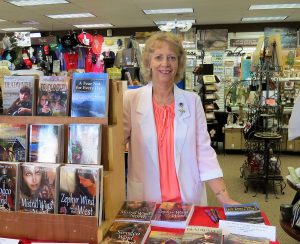 At a book signing last August

Privacy Policy
« Evacuation Level Three: Get Out NOW! — Are You Ready?
Knock Their Socks Off — First Steps to Writing Amazing Fiction » 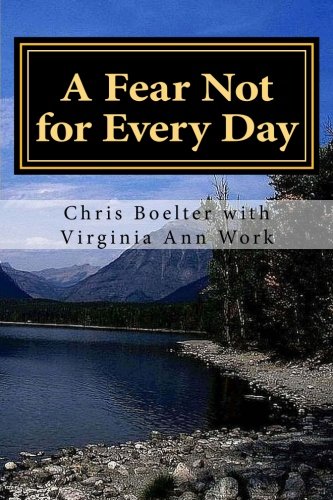